Reports & Bills
Although Fairfax County provides data based on population and hauler tonnage information, the City of Falls Church can also accurately depict the residential recycling rate rather than the residential and commercial information provided to Virginia Department of Environmental Quality (VADEQ).

Each month, our contractor's bill includes recycling and refuse tonnages. Comparing refuse and recycling tonnages of our residential pickups provides us with accurate residential recycling rates. Below depicts the trends and rates.

Decrease in Solid Waste
Residential solid waste (trash and recycling) is generally decreasing. As the graphs "Total Solid Waste System" and "Residential Recycling Rate" dictates however, it varies every other year.

In 2010 and 2008, residential waste increased significantly. This may be due to the national recession and other factors. In 2011, however, City of Falls Church residents recycled more and threw away less than ever before.

Recycling Mandate
Since 1989, Virginia has required localities to recycle. Legislation introduced in 2006 provided a 2-tiered recycling mandate. Localities or regions (called Solid Waste Planning Units or SWPUs) with high population densities or high unemployment rates, must meet a 15% recycling rate. SWPUs with higher densities or low unemployment rates, such as the City of Falls Church, are required by the state to uphold a 25% recycling rate.

Management Plan
The City of Falls Church not only strives to uphold the state mandated goal of 25% but sets forth a goal of a 65% recycling rate in the Solid Waste Management Plan, adopted by council in 2004. The graph below shows the Total Municipal Solid Waste (MSW) generated by both residential and commercial entities in the city, total waste disposed (refuse), and total waste recycled. While the recession in 2008 affected our progress, historically, the City of Falls Church reduces its waste, and increases its recycling tonnage each year. 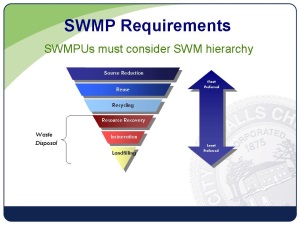 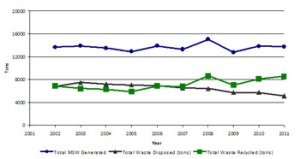