COVID-19 Updates Substantial Level of Transmission: Get the Vaccine, Wear a Mask, and Keep Your Distance Read On...

About Stormwater in the City

The Department of Public Works (DPW) manages, maintains, and repairs the City's stormwater system, which includes 140,000 linear feet of storm drain, 1,400 appurtenances, and 8,100 feet of stream channel in the Four Mile Run and Tripp's Run watersheds.

Stormwater is rainwater that does not soak into the ground but instead, runs off buildings, streets, parking lots, and other surfaces. Stormwater is collected in gutters and flows to storm drain inlets and into the city's storm drain system. This water then flows - untreated - to tributaries and to either Tripp's Run or Four Mile Run, then to the Potomac River and out to the Chesapeake Bay.
Polluted runoff is the number one cause of water pollution in Northern Virginia. The same rain that washes streets, yards, and parking lots clean is sending chemicals, germs, and trash down the drain. All of the storm drains in the City of Falls Church lead directly to streams and rivers. 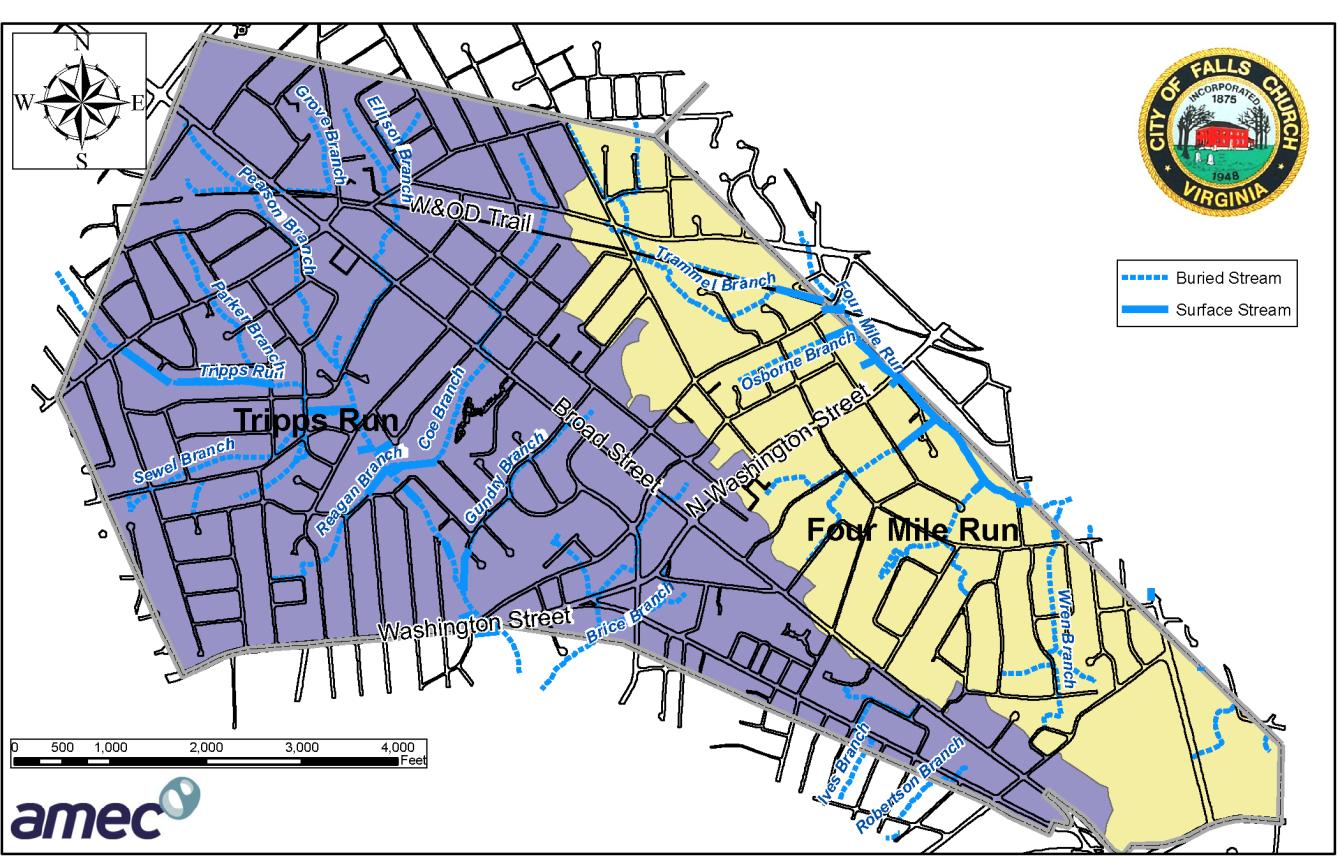 The City of Falls Church is underway with six Capital Improvement Program (CIP) projects dedicated to flood mitigation and remediation for specific areas of the City that routinely experience severe and frequent flooding. Visit the Stormwater Project page to learn about each of these projects in detail.

The City hosted a Town Hall meeting on the July 8 flooding. Over 40 community members attended to about learn about the City's stormwater and sewer systems, recent projects, and to start a dialogue on upcoming priorities. The video and materials can be viewed here.
What is a Resource Protection Area?
It is a sensitive environmental corridor, that by state law, must be preserved or restored to a natural condition when disturbed. The purpose of the RPA is to provide a buffer between development and water resources like streams. For more information click here. 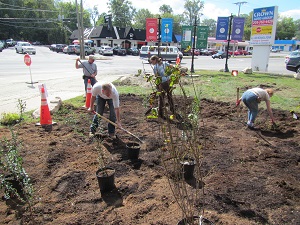 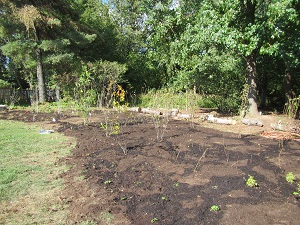 For more information on how this impacts development projects please read the Stormwater Permit guidance document.
Only Rain Down the Drain
This is the motto of the Northern Virginia Clean Water Partners (NVCWP), which represents 11 northern Virginia local governments (including the City of Falls Church), independent water and sanitary sewer authorities, and local businesses who care about the quality of our waterways and the region's quality of life.

Polluted stormwater runoff is the number one cause of poor quality of river and stream water, which also serve as the sources of our drinking water. NVCWP's goal is to work together to keep local residents healthy and safe by reducing the amount of pollution that reaches local creeks and rivers.
Chesapeake Bay Preservation Program
The Stormwater Management Review Team is a team composed of City staff from different departments who evaluate development plans as directed by City code and the Chesapeake Bay Preservation Area Overlay District. These include projects that are subject to grading plan requirements.

The goal of this review is to reduce the impacts of development on water quality of local streams, the Potomac River, and the Chesapeake Bay. A combination of vegetative buffering, low-impact development, and best management practice techniques help to work towards this goal. 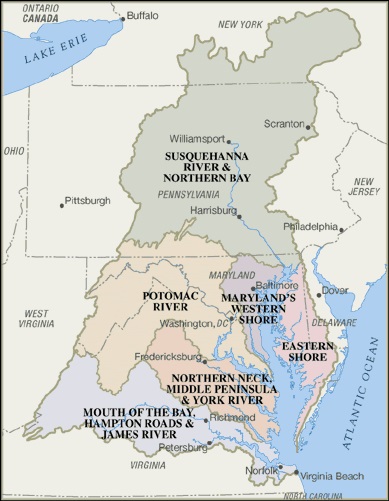 Total Maximum Daily Load (TMDL) is a term used by the Virginia Department of Environmental Quality (DEQ) for plans to restore and maintain water quality in streams, lakes, and estuaries that violate water quality standards. TMDL is also known as a "pollution diet."

Read more about the draft Draft Chesapeake Bay TMDL Action Plan. Learn how you can participate in the public comment period that ends September 18.

During extensive testing for pollutants in 1998, major portions of Chesapeake Bay and its tidal tributaries within Virginia were listed as impaired. The main pollutants causing these impairments are nitrogen, phosphorus, and sediment. Significant efforts are underway by federal, state, and local governments, including the City of Falls Church, to address these water quality issues and meet goals established under the federal Clean Water Act.

The Chesapeake Bay watershed remains on the impaired waters list, so the EPA requires that a TMDL be developed.

PCBs and the Environment

Polychlorinated Biphenyls (PCBs) are a group of man-made compounds that were widely used from approximately 1929 until the U.S. ban in 1979. They were utilized mainly in electrical equipment, because of their non-flammability and stability. PCBs have no known taste or smell and range in consistency from oil to a waxy solid. PCBs still exist in our air, soil and water from previous releases. Because of their stability, PCBs do not break down in the environment. They often attach to sediment that is washed into our local waterbodies, the Potomac River, and the Chesapeake Bay. PCBs accumulate in organisms found in these waterways and can cause serious health concerns for citizens who consume contaminated fish and shellfish. Caution must be taken to prevent the release of PCBs from spills and leaks from electrical equipment, improper disposal and storage of equipment like fluorescent light ballasts, and construction wastes from buildings constructed before 1980.

Federal and state laws and city ordinance prohibit dumping of solid or hazardous waste into any streams or drainage areas in the city. Furthermore, the ordinance authorizes city representatives to enforce and administer the provisions of the ordinance, including issuing warnings and monetary fines for violations.

City code also prohibits unauthorized connections to any public storm sewer and lifting of manholes or tampering with manholes, basins, or storm sewer inlets. Any person with a need to make a connection to the city storm drain system should contact the Engineering and Construction Division at 703-248-5350 (TTY 711).

To report a hazardous material spill that constitutes an emergency and requires cleanup, call 911 for the Fire Department Hazardous Material response.
[]